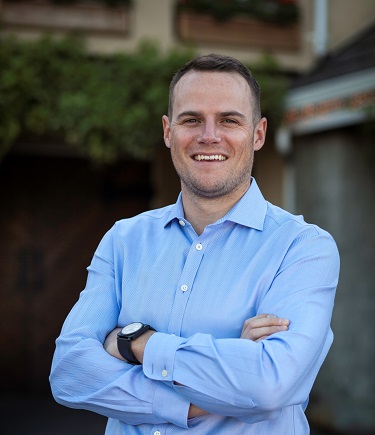 Tom joined DeLille as General Manager in 2014 and became CEO in 2017.  Under his leadership DeLille has expanded production and sales, with distribution in nearly all 50 states and over 10 countries.  In 2019, DeLille repurposed the iconic former Redhook Brewery in Woodinville and built a new three-story tasting room.  Tom has also helped DeLille cement its roots on Red Mountain with the buyout of its vineyard, Grand Ciel.  He joined DeLille after leaving Bacchus Capital, a wine focused investment and advisory firm, where he was Managing Director.  Tom hails from Columbus, Ohio, is a lifelong Browns and Buckeyes fan, and is graduate of Colorado College and the London School of Economics.  He fell in love with wine after stints in the financial industry in London and New York and moved to Washington because of the world class grape growing and winemaking, as well as the Cascade Range.

DeLille Cellars is the third oldest operating winery in Woodinville, WA, founded in 1992.  Known for pioneering Bordeaux-style blends from Washington State, the winery has maintained a tradition of quality and excellence with over 600 individual 90+ ratings from leading publications.  DeLille Cellars focuses on the Red Mountain AVA and sources grapes from Washington’s most acclaimed vineyards.  The winery is recognized by notable wine critics and influencers, including Robert Parker, as one of the top producers in the state.